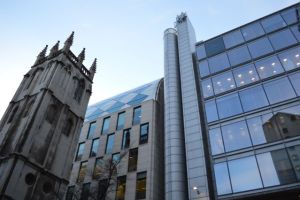 From the left – Wren, Foster, Rogers

Stand with your back to the City of London police HQ in Wood Street and you can see the collision of old and new in the City’s architecture. The number of cranes that are visible and the noises of construction one hears as one walks around the square mile are testament to the sheer number of new buildings being built.

It was ever thus. In the years following the war concrete and glass square boxes dominated. They’ve now been largely replaced with glass and steel curves and other forms. This is a sign of the City’s strength – it has always been able to reinvent and rebuild itself. The new being constructed on and around the old.

The view in Wood Street is a case in point. First we have a 450 year old tower This is all that remains of the church of St Alban, destroyed in the Great Fire and rebuilt by Wren, then destroyed again in the Blitz. It’s unusual for Wren as it’s built in what’s known as the gothic style – note the long elegant windows and the pinnacles at each corner of the tower.

It wasn’t rebuilt after the war, nor was it turned into an open space like some of the other bombed out churches. But the tower was preserved – it’s now somebody’s house – and is a listed building.

Because of its listing when new buildings were planned around it, they weren’t allowed to impose, and we can see two different ways in which architects worked around this.

Immediately behind the tower is Foster and partners effort. The front of the building is faced in Portland stone, and the roof curves away from the street. Next to it is a building by Richard Rogers’. This is actually three linked structures, that rise from 8 storeys on Wood Street, back to 18 storeys to the west. To keep the roof levels free the building has things like its air conditioning plant in the basement, with the air intakes and extracts in vibrant colours at street level. 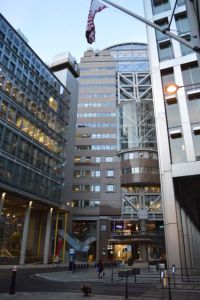 At the far end of the street we can see the work of another ‘starchitect’ – Sir Terry Farrell’s Alban Gate. This is in the ‘80s style known as post-modernism – an exuberant and playful way of designing buildings (see also Number One Poultry). This made use of what’s know as ‘air rights’ to build over the four lane highway of London Wall – that part of the building sits on eight columns to allow it to straddle that road. 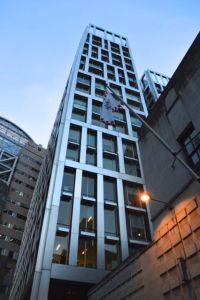 The back of 5 Aldermanbury Square

And our final building backs onto Wood Street, Eric Parry’s Aldermanbury Square, completed in 2007 and a finalist for the Stirling Prize in 2009. We can see the stainless steel clad building curving back from Wood Street and there’s a pedestrian link from here to a new public space at the front of the building.

You can download a walk that takes you through the City to explore some of the latest developments in architecture here.