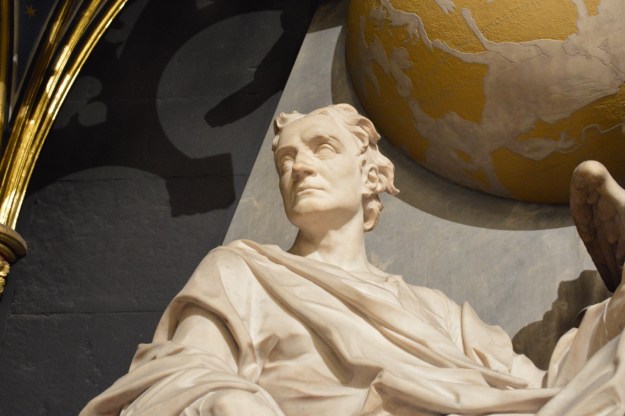 You’ve almost certainly heard of Poets’ Corner, the spot within Westminster Abbey given over to the commemoration of the nations’ authors, poets and playwrights. Amongst dozens of others you’ll find Chaucer’s tomb, plaques to Edward Lear, Wordsworth, D H Lawrence and the Bronte sisters, the graves of Dickens and Browning, a statue of Shakespeare and the bust of Longfellow, windows to the memory of Marlowe, Oscar Wilde and Mrs Gaskell.

This is the group of graves and memorials centred on the grave and commemorative statue to Sir Isaac Newton (1643-1727), the eminent scientist of the period. Responsible for advances in mathematics, optics, physics, astronomy; deviser of calculus, laws of motion and gravitational theory, he is one of the towering figures of science. “Hic depositum est, quod mortale fuit Isaaci Newtoni” says the epitaph on the grey marble slab that covers him: “here lies what was mortal of Isaac Newton”. The English translation is repeated on the nearby memorial stone to Stephen Hawking, a successor to Newton as Lucasian Professor of Mathematics at Cambridge University. Hawking’s ashes were interred in the Abbey in 2018. END_OF_DOCUMENT_TOKEN_TO_BE_REPLACED

Whenever I’m taking Americans around Westminster Abbey, I like to mention that when Columbus stumbled across the Americas, King Edward’s Chair (commonly known as the Coronation Chair) was already nearly 200 years old; when the rebellious colonists laid out their Declaration of Independence, some two dozen monarchs had already sat here to be crowned.

It really is that old – created in 1300/01, used in its first coronation (of Edward II) in 1307. It predates all but one of the objects in the Crown Jewels (the Coronation Spoon), and comes from a time before the concept of ‘Britain’ or a’United Kingdom’ exercised any minds. Elizabeth II sat in it in June 1953, as did Elizabeth I in January 1559. Charles III will be crowned in it, as were Charles I and II; Henry VIII, Richard III, Henry V and most of those other kings you remember from Shakespeare were crowned in it. English history is in its very grain. END_OF_DOCUMENT_TOKEN_TO_BE_REPLACED 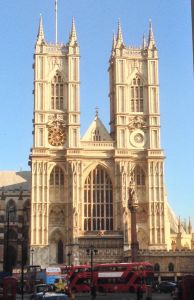 The blog has been a bit neglected over the past few months as the work level for my London Blue Badge course has ramped up, but once I’m through next month’s final course exams you’ll be hit with a superabundance of posts as I type up my notes on the British Museum, the Tower of London, St Paul’s – and Westminster Abbey.

One of the great things about doing the Blue Badge has been the opportunity to go around some of those London sites that tourists never miss, but which we Londoners rarely, if ever, visit.