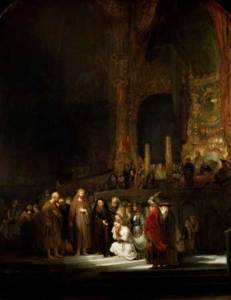 Rembrandt: The Woman Taken in Adultery: 1644

This is a religious painting by the Dutch artist Rembrandt Harmenzoon van Rijn. It’s one of the foundation acquisitions of the Gallery, being part of the Angerstein collection that formed the basis of the National Gallery in 1824.

We see a scene taking place in a small part of a much larger canvas. A group of figures are picked out by a shaft of light, the central one being a woman in white, kneeling and tearful, her veil being lifted – a considerable insult to her – by an older man who is presenting the woman to Christ, the tall, simply dressed man standing at the top of the flight of stairs. Behind this group the building soars upwards with, on the right, what seems like a huge gold structure.

It’s an illustration of a story from the gospel of St John. We’re in the temple in Jerusalem, the gold structure is the Ark of the Covenant, and the scribes and the Pharisees – they’re men in expensive robes who we can see around the woman – are trying to trick Jesus. Knowing that Christ forgave wrongdoers they brought an adulterous woman to him and asked what her punishment should be. If he forgave her, he would be breaking the teachings of Moses; if he condemned her, she would be stoned to death. “Let he who is without sin” said Christ “cast the first stone.”

Note the contrast between the plainness of the clothing of Christ and his companion and the richness of those of the Pharisees. This is Rembrandt highlighting the difference between the old, decadent religion – further emphasised by the magnificence of the temple – and the simplicity of Christ’s faith. All this richness means nothing against the word of god. Christ’s superiority is reinforced by painting him slightly taller than the other characters and standing at the top of a flight of stairs – he is physically and morally above the others.

Rembrandt was famous as a colourist, and here he uses a very limited palette of dark and muted colours, picking out effects in white, silver and red. We would call this Baroque art – paintings characterised by dramatic scenes, rich colour and intense light and dark (we’ll see another exceptional example of the Baroque shortly). In some ways it harks back to Rembrandt’s earlier works when he painted numerous biblical scenes – although they were generally from the Old Testament and this is obviously from the New Testament.

It was done during a when Rembrandt’s life was changing for the worse. His wife had died in 1642 leaving him with a young son. Career wise, he’d enjoyed a great deal of success in the previous decade, moving to Amsterdam when he was 25 and making a lot of money painting portraits, but these commissions seemed to dry up in the 1640s, and his spending didn’t take account of his more limited income. This culminated in him having to sell his house and his art collections in the mid 1650 and, although he continued to get commissions, when he died in 1669 he was buried in what amounted to a pauper’s grave.

NEXT: CLAUDE – THE EMBARKATION OF ST URSULA