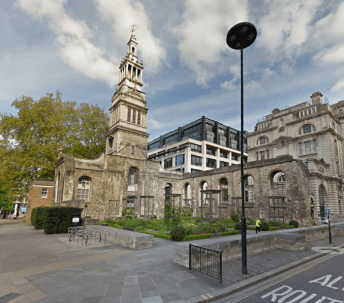 In the post on the Firefighters’ Memorial we talked about the destruction caused by the Blitz – and Christchruch Greyfriars gives a hint of that devastation. This was a Wren church built after the 1666 Great Fire and gutted in WW2. Rather than being restored like so many others, it was turned into a garden. Flowerbeds mark where the pews once stood, and wooden frames with climbing plants show where the towers once stood in the nave.

Before Wren’s church it had been one of the largest churches in London. Originally it was part of a Franciscan friary (Franciscans wore grey habits, hence greyfriars). Four queens were buried in the friary grounds, including the wives of Edward I and Edward II , which stretched from King Edward Street (once known as ‘Stinking Lane’ by the way) right down to the City Wall at Newgate.

When Henry VIII broke with the Catholic church in 1533 over his divorce from Katherine of Aragon, he also ‘dissolved’ many religious institutions and Greyfriars was one of those. The friary church became Christchurch. Another part of the friary was to become the site of Christ’s Hospital School – which still exists, although it moved out of the City at the start of the 20th century. The pupils still wear a tudor-style uniform of a long blue coat and yellow knee length socks.

The fire started in the shop of the King’s baker, Thomas Farriner, in Pudding Lane, just north of London Bridge.

It had been a hot summer, so the thatched roofs were dry and the fire quickly took hold among the wooden buildings. A strong wind from the east blew the flames into the city.

There weren’t firefighters in those days. To stop a serious fire you had to pull buildings down in its path and create fire breaks, but when they woke up the Lord Mayor, Thomas Bloodworth, to take action he said “Pish! A woman might piss it out.”

Four days later when the fire was eventually under control, 80% of the City was destroyed, there were 100,000 people homeless and old St Paul’s cathedral was a ruin.

There were some ambitious plans for rebuilding the City with wider streets, long, straight boulevards and big squares, but the priority in the City is always money, and people wanted to get back to business as quickly as possible. So it was rebuilt on essentially the same street plan – no thatched roofs, more stone, buildings couldn’t overhand the street – but pretty much the same layout. That’s why we still have so many small lanes and narrow alleys – what you can see is a 21st century city on a medieval street layout.

To commemorate the conflagration a monument was built by Wren – called ‘The Monument’. And you can see it – and climb the 311 stairs to the top – near where the fire started by London Bridge.