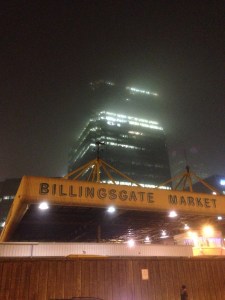 It’s five a.m. – 5 o’clock in the morning – in a misty Canary Wharf. You can’t see the top of 1 Canada Square and there are few lights on in the HSBC HQ, but where I am is buzzing with workers and shoppers.

And, despite the supermarkets and the chain restaurants, they still do to a certain extent. Around Billingsgate you’ll see buyers for fishmongers and restaurants, notebooks in hand, buying boxes of fish that are then loaded onto big steel trolleys by the white-clothed porters and taken out to the buyers’ vans. (“Your legs. Your legs” is the warning shout of the porters as they hurtle down the aisles.)

There’s fresh fish and frozen fish, live eels and semi-dead crustaceans, shellfish, kippers and smoked salmon, pulled from the oceans, lakes and rivers around the world.

It’s not a huge space – perhaps the size of a couple of football pitches – with four aisles lined with stalls where the produce is displayed in ice-filled polystyrene boxes. You look at the fish, poke the flesh, lift the gills and then buy the box or a whole fish – we got a couple of kilos of prawns, a 4kg salmon, a 1 1/2kg sea bass, a kilo of smoked haddock – load it up in the boot of your car and join the early commuters back into town. 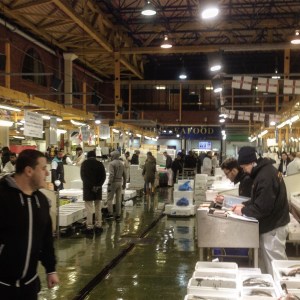 In the 20 years or so that we’ve been going there (4 or 5 times a year – I mean, it’s at 5 a.m. for god’s sake) the market and its customers (and hence its produce) has changed. There are now fewer trade buyers and a lot more retail customers. And those customers reflect London and the changing demographics of the capital. The market is a melting pot with Africans and Indians, veil-wearing arabs, Chinese (lots of Chinese), east Europeans and middle class foodies all shopping together.

The demographic shift is represented in a change in the type of fish sold, with incredibly colourful tropical fish brushing fins with the cod, haddock, salmon and traditional foods of the UK, and with many more freshwater fishes – carp, pike, perch – for the east Europeans.

The traders too have changed. Where once all the stalls were run by white-British males, there is now much more ethnic diversity (although the number of women working there is tiny). Even the porters – as archetypical old east end as the dockers were – seem now to have non-white Brits among their ranks. It’s slow progress, but it’s progress nonetheless. 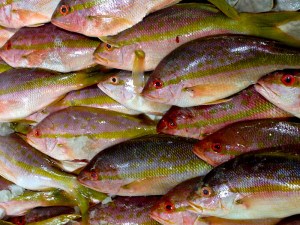 Billingsgate moved to its present site in 1982, leaving its historic home, an Italianate folly between London Bridge and the Tower. (The architect of that building was Horace Jones, who was also responsible for Smithfield and Leadenhall market buildings, and Tower Bridge.)

The freehold is owned by Tower Hamlets, but the market itself is run by the Corporation of London, who pay ground rent of one fish each year. Back in 1982 the docklands area was – almost literally – a wasteland. The docks had completely closed in 1980 and it would be years before a pile would be sunk for the new ‘Manhattan on Thames’ development (and at least a decade and a half before  Canary Wharf was anything other than a ‘hardship posting’ for the people who had to work there). This was the unfashionable side of London, where land was cheap.

But that ground is a much, much more valuable piece of real estate than it was 30 years ago, and the market is now hemmed in on three sides by the tall towers of Canary Wharf, and is just metres from the new Crossrail station. That makes it – to me – seem very improbable that Billingsgate will not be forced to move at some point relatively soon. (See also New Covent Garden, once just one of many low-rise industrial units in Nine Elms, now the occupant of a hugely desirable acreage surrounded by multi-storey luxury developments.)

So make the most of it while you can. Billingsgate is open Tuesday to Saturday, from 4 a.m. to 9:30 a.m. The car park is £2 and the market runs on cash. The nearest DLR is Poplar – but if you go by public transport remember that you’ll be travelling home in rush hour with several kilos of fish, which may make you less than popular with work-bound commuters.