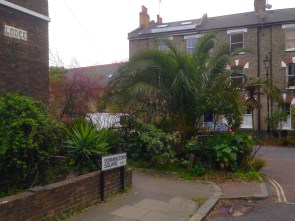 There’s a truism that if you venture off the main street almost anywhere in London you’ll discover something new.

I do this a lot, sometimes just finding pretty ordinary Victorian streets, but often stumbling across a real gem. But it’s been a long time since I was struck by anything so wonderfully, gloriously, fabulously bonkers as Bonnington Square.

Within a girder’s throw of the Nine Elms development, and just off the Oval cycle loop (which is how I came across it), is the complete antithesis of the ordered Central London garden square.

There is a garden in the middle (called ‘The Pleasure Garden’ in a nod to the Vauxhall Pleasure Gardens that used to be 100 metres or so away), but the magical thing is that nearly every conceivable part of the square bar the road itself is overgrowing with palms, giant ferns, vines and other greenery. It’s like one of those vision of an abandoned city, where the jungle reclaims the space where civilisation once was. (A feeling increased by the dilapidated nature of some of the buildings in the square, ‘Vine Lodge’ and its wooden extension being my favourites.) 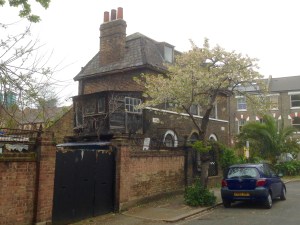 According to the square’s website, the planting was a community effort that started in the early ’90s when residents fought off a builder’s plan to turn the derelict square into a storage area.

Even on a gloomy April afternoon it was a wonderful find, so if the sun is shining it will be utterly glorious. There’s a cafe as well, although with rather eccentric opening hours.

There are more pictures on the Square’s Facebook page.

UPDATE. I went back to the square with my camera and some of the images are below (click on any image to bring up the gallery). I realised as I was walking around that I just had a huge grin on my face the whole time – where else in London does one get that reaction?