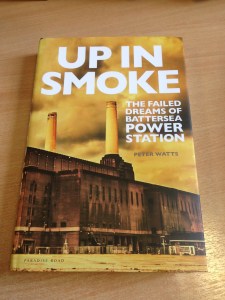 I have a terrible confession to make, one that will see me shunned by London society, if not drummed out of the city altogether: I don’t actually like Battersea power station.

Giles Gilbert Scott’s brooding brick behemoth by Chelsea Bridge has always been too squat, too square for my tastes. His Bankside power station (now the home of the Tate Modern) is wonderfully proportioned, its single chimney in tasteful contrast to the bloated glass towers on the other side of the river.

And if it were not for its chimneys, would anyone give a stuff about Battersea? Their elegant flutes are (for me) the sole redeeming feature of Scott’s earlier building.

They were – as I discovered in Peter Watts’ excellent history of the power station Up in Smoke – an accident, their number, height and position at each of the corners of the building a result of the process of desulphuring the smoke from the coal burned to power the station’s turbines. If there were, as earlier designs planned for, eight or even sixteen chimneys, the power station would most likely have been demolished when it went out of service in 1983, just as Fulham power station was (and who laments that?).

The fact that it survived is down to Michael Heseltine, who listed the whole building in 1980, meaning that any development had to preserve the fabric of the building, and that redevelopment was out of the question. This, and the chancers, dreamers and speculators who have owned the station and the area around it, is the reason the site has been empty and decaying for the past 30 years.

Watts canters through the plans and pipe dreams of the various owners. There is John Broome’s almost ludicrous vision of the power station as a theme park; the 13 years when the site was owned by Victor Hwang’s Parkview, when a succession of architects produced ever grander and more visionary schemes, none of which were ever started.; the Irishmen from Treasury Holdings who knew what they were doing and how to get it done, but who were undone by the bursting of the Irish property bubble in 2008. Their masterplan was put together by Rafael Vinoly, architect of the deeply unloved Walkie Talkie. this plan initially included a 980ft ‘eco tower’, described by Boris Johnson as “an inverted toilet roll holder” and by architect Neven Sidor, much more succinctly, as a ‘piece of shit’. 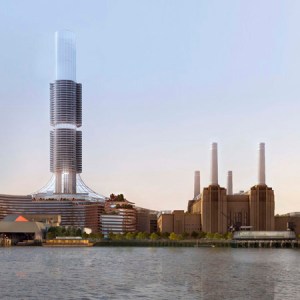 Vinoly’s ‘eco tower’. Wrong on so many levels.

The site is now owned by a Malaysian consortium and serious work has begun, the chimneys (because they are corroded and unsafe) coming down and being rebuilt. The whole area is now linked together with the Nine Elms development and with a privately-funded spur to the Northern Line underway. This time, after 30 years of false starts, it looks as if something will happen.

But that something is a far cry from what was originally envisaged, and the story of the power station and its site is the story of building and development across all of London. In the 1980s the city was losing population and development was about creating jobs – even if they were in a theme park. Wandsworth’s policy in the beginning was specifically against having residential or retail space in the development; as the decades passed, and as London’s own property bubble inflated, the land value has increased massively, the council’s aim is to build more ‘homes’ and the developers have leveraged this, and then some. The current plan has thousands of properties, but most of these are being built with the super rich in mind, as investments. A studio flat in the redeveloped power station sold for £1.5 million – in 1984 you could have bought the whole building and the land it stands on for that amount.

The building survives and is being refurbished but, Watts says “as the overall footprint of the development grew, the significance of the power station diminished to the point where it seems little more than a brandmark“. 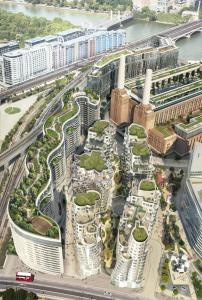 And even though it does survive, the views of the building will be lost as it will be surrounded by a variety of high rise constructions by a variety of international starchitects. “It will offer nothing to London that the city doesn’t already have to excess, namely expensive and exclusive accommodation, office space and shops.”

It’s a bit like the old medical joke “the operation was successful, but the patient died”. The building is preserved, but what made the site unique will be gone.

Perhaps we’ll be lucky – King’s Cross seems to be working, creating a ‘place’ with atmosphere – but let’s not hold our breath. The chances are it will be a luxury nowhere, like Chelsea Harbour or Paddington Basin or Canary Wharf, as soulless now as it was 20 years ago.

Some of the best plans for Battersea are ones that never had a hope of being built. Perhaps my favourite is Terry Farrell’s, who thought the building should be a managed ruin, like a modern-day Fountain’s Abbey, with the roof off, the side walls gone and a vast park filling the space of the buildings.

Now that I would have liked.

Up in Smoke is published by Paradise Road, from whom you can buy the book direct and post free.