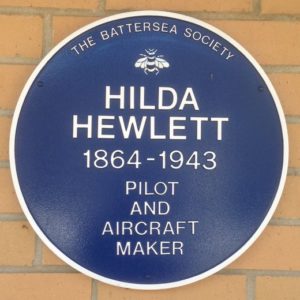 Men outnumber women on London’s Blue Plaques by over seven to one, so it was good to stumble across this in Vardens Road, just off St John’s Hill.

It was unveiled in September 2015 to commemorate the first woman to gain a pilot’s licence (in 1911, when she was 47) and – in association with French engineer Gustav Blondeau – the manufacturer of numerous aeroplanes.

Hilda was a clergyman’s daughter (her father was vicar of St Peter’s in Vauxhall) who married Maurice Hewlett , a young barrister who switched careers to become a romantic novelist. Hilda seems to have been fascinated with engines. She was the mechanic/passenger for a Miss Hind – the only woman driver in the 1906 Land’s End to John o’ Groats rally – and got into flying soon afterwards, using the wonderful pseudonym “Mrs Grace Bird”. 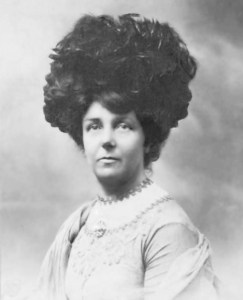 Blondeau opened the UK’s first flying school, at Brooklands in Surrey, in 1910, and in 1912 opened their factory in Vardens Road, on the site of the Omnia ice-rink, building Farman, Caudron and Hanriot aeroplanes under licence. In 1914 the firm moved to a bigger site in Bedfordshire, which made some 800 aircraft during the first world war.

Hilda’s granddaughter, Gail Hewlett, has written a biography: “Old Bird, the irrepressible Mrs Hewlett” which unfortunately seems to be out of print, and contributed a short biography to the Battersea Society’s Newsletter (page 4). There are Wikipedia entries for Hilda and for Hewlett & Blondeau, and this blog post also has a lot of biographical detail.