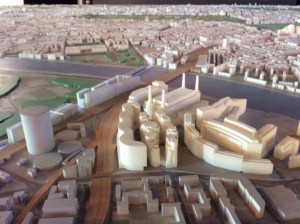 They don’t make as big a deal of it as they should, but at the Building Centre in Store Street (off Tottenham Court Road, and just round the corner from the British Museum) there is the most fantastic architectural model of London.

You can see the capital stretch out in front of you, from Stratford in the east right across to Old Oak Common, and from Primrose Hill in the north down to Nine Elms.

There are the clusters of skyscrapers in the City and Canary Wharf, the new developments at Battersea and Paddington. You can take in the ordered streets and quiet squares; notice the Eye, the Orbit, the Post Office (Telecom) Tower and the way the river weaves along, and appreciate the extraordinary amount of green space with which London is blessed.

The Building Centre has, in its basement, a full time showroom space where architects can see the latest bits of stuff for their projects, from baffling-looking construction widgets, to ultra-high-tech plumbing. But it’s also the home of New London Architecture, who organise exhibitions and talks about London’s built environment, and the London Model is built for them by the architectural model-makers Pipers. It is an extraordinarily detailed piece of work. 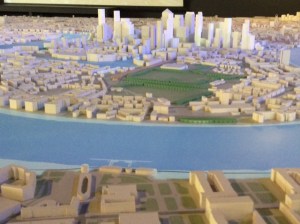 It’s part of NLA’s permanent (but ever-changing) exhibition that looks at the London’s developments – new buildings, proposals for changing how places and communities work, the infrastructure of the city. But it’s just part of what you’ll find there.

At the moment some bizarre engineering construction is being built, a prototype cantilevered platform which will… Well, I’m not entirely sure what it’s going to do, but it looks fantastic.

Also on the ground floor are various student projects from the RCA Student Prize, including a reinvention of country skills for the 21st century and a ‘proposal’ for a kilometre of underground living space.

And in the basement, a celebration of landscape architect Lancelot ‘Capability’ Brown, with some stunning photographs of Brown’s work and gardens and spaces inspired by his designs.

Entry to all this is free, and there’s a very nice cafe (with free wi fi), which is where I’m currently sat.