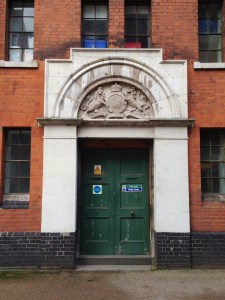 Another door, this time on Barge House Street, in the outer wall of what is now the Oxo Tower complex.

The Royal coat of arms above the door is because prior to being a cold store for the company that made Oxo, the building had been a power station for the Post Office.

According to the Wikipedia entry, much of the power station was demolished in 1928 and the building rebuilt in Art Deco style by Albert Moore, although the river-facing facade was retained. Obviously the Barge House Street facade was also left relatively unchanged.