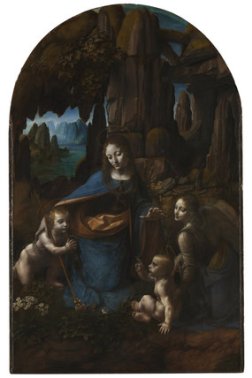 There’s some imprecision about the date, which I’ll come to shortly.

We’re looking at a painting by one of the most celebrated of Renaissance artists – Leonardo da Vinci. He was a sculptor, inventor, engineer, anatomist, and the painter of some of the most famous works in history, the Mona Lisa and the Last Supper.

Here we see a bizarre landscape of rocks and strange vegetation, with four figures. At first glance you might think it’s two mothers with their children, but look at the woman on the right and you’ll notice “she” has wings – so this is an angel and male (if angels have sexes).

This is the representation of a Tuscan folk tale about Jesus’s flight into Egypt to escape Herod, where he met his cousin, the infant John the Baptist, who had been saved by the angel Uriel. So reading from left to right here we have John the Baptist, the Virgin Mary, Jesus and Uriel.

We know John is on the right because of the long staff he holds, and Jesus is making the gesture of benediction. Mary has her arm around John and is blessing Christ with her left hand. These three figures form a triangle that constitutes – for the viewer – the centre of the image.

Leonardo uses a couple of techniques here of which he was the master. The first is what’s known as ‘arial perspective’ – how, when we look into the distance, the colours fade and objects lose their focus. Look at the sky and the mountain tops over the sea in the left here.

The second is a technique known as ‘sfumato’ – looking at objects as if through smoke, “without lines or borders” as Leonardo himself described it. This is the fine shading that produces soft, transitions between colours and tones – subtle gradations, from light to dark areas. Leonardo painted the landscape in dark browns and then added blue and brightness later.

I say Leonardo, but experts think that although most of this painting was done by the man himself, some of it was done by his studio. That’s because of the rather troubled story about the creation of this work, which is the reason why we can’t be absolutely precise about the date.

In 1483 a religious order called the Confraternity of the Immaculate Conception in Milan, commissioned Leonardo to product a painting for an altar in their chapel. An amount of money was agreed, but Leonardo put a lot of work into the picture and tried to get more for it. There was a dispute that lasted until 1508 when Leonardo finally delivered this painting to the order.

However, if you go to the Louvre in Paris you’ll see another version of this painting, and what art historians believe is that the Louvre picture was the one Leonardo originally painted. When there was the argument over payment Leonardo took it away and sold it. When he and the Order agreed terms he had to do this new one to fulfill the contract.