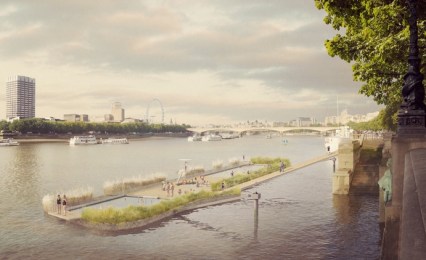 Over on Kickstarter, the Thames Baths Project is within a whisker of getting its first stage of funding together to build a swimming pool on the Thames. The pool would be a floating pontoon on the river and take water from the river, so one could swim in the Thames right in the middle of Central London. This £125,000 round of funding would help the team behind it apply for planning permission and make the case for it to be built (although that case seems self-evident to me).

Back in the 1930s one could actually swim in the river by Tower Bridge as that was the site of the Tower Foreshore, a beach created as a free amenity for the children of the East End. 1500 barge loads of sand were dumped on the north bank between St Katherine’s steps and the Tower with the beach being officially declared open on 23 July 1934. King George V decreed that it was to be used by the children of London, and that they should be given “free access forever”. 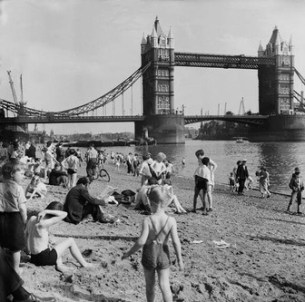 The driving force behind this project was Philip “Tubby” Clayton, the vicar of All Hallows by the Tower in the East End. A remarkable and energetic character, Clayton had noticed children swimming in the river by the Tower and, rather than trying to have this stopped, put his efforts towards making it safer. The sand was acquired, lifebelts, beach wardens and a rescue boat were provided and the beach was open for business. Remember that at this time many people, especially in the East End, could not afford any sort of holiday, so the Tower Beach became a hugely popular destination. Although only open until September, it’s estimated that over 70,000 people visited the beach in the first year. Rowing boats and deck chairs could be hired, and the photos of the period look like any other beach shots of the 1930s – except with the massive and incongruous presence of Tower Bridge in the background.

The beach closed during World War 2, but reopened again in 1946 and stayed open right until 1971, when worries about the dangers of bathing in the Thames forced it to close (ironically so, given that the pollution levels of 1934 would have been significantly higher than the ’70s). 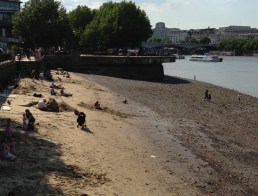 The sandy beach at Gabriel’s Wharf

If you go to Gabriel’s Wharf on the Southbank at low tide you can still access a sandy beach, and on a hot summer’s day you’ll find families grabbing the sun on their own patch of London Riviera. But no one swims, so let’s hope the Thames Bath Project gets its planning permission and is up and running as soon as possible. Much as I love gardens and much as I love bridges, if some of the money being thrown at the fatuous ‘Garden Bridge’ were put towards this Lido, London would be a happier place