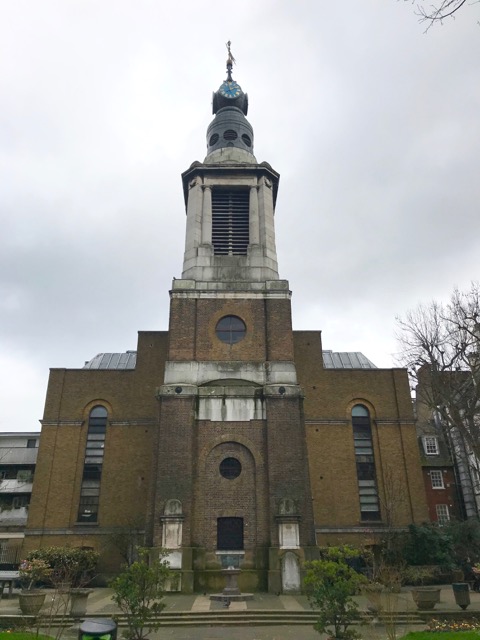 St Anne’s churchyard is a small patch of open ground at the Shaftesbury Avenue end of Wardour Street, Soho.

Once the hang out of druggies and al-fresco drinkers, it’s now a pleasant enough quiet spot in a crowded part of the city, and even on the grey, chilly March day I wandered in there, there were plenty of people sat eating their lunches.

The essayist William Hazlitt is buried in the churchyard (he died in Frith Street – his old home now a very expensive hotel) as is Theodore I of Corsica, who has an epitaph on a plaque on the tower wall, written by Horace Walpole:

Near this place is interred Theodore King of Corsica, who died in this parish, December 11th, 1756 immediately after leaving the King’s Bench Prison by the benefit of the Act of Insolvency; in consequence of which he registered his kingdom of Corsica for the use of his creditors.” .

“The grave, great teacher, to a level brings
Heroes and beggars, galley slaves and kings.
But Theodore this moral learned ere dead:
Fate poured its lessons on his living head,
Bestowed a kingdom, but denied him bread.” 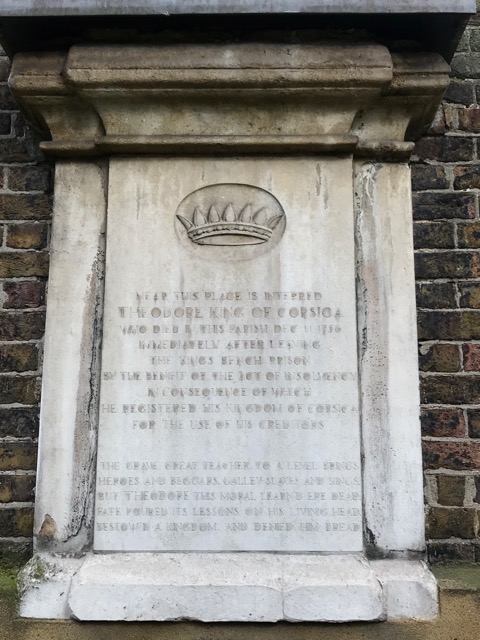 Born Theodor Stephan Freiherr von Neuhoff in Westphalia in 1694, Neuhoff served in the French army, then the Swedish, was sent on diplomatic missions to England and to Spain, served an Italian cardinal in the court of Philip V, was mixed up in the French Mississippi Company then, (per wikipedia) “led a wandering existence visiting Portugal, the Netherlands, and Italy.”

In March 1736 he then got involved with Corsican rebels fighting against the Genoese, persuaded them that he could help liberate their island, and was elected King Theodore I. His war of liberation was unsuccessful and he fled Corsica in November 1736, pitching up in Holland, where he was imprisoned for debt.

In 1749 he came to England , but fell into debt again and was confined to the King’s Bench prison in Southwark. The bit I love is that  in 1755 he declared himself bankrupt, making over the kingdom of Corsica to his creditors. After this he subsisted on the charity of Horace Walpole and other friends until his death in London in 1756, aged 62.

There is a biography of Theodore by Julia Gasper (another one for the reading list) with this wonderful biography in the blurb “Mixing with royalty, rogues and rabble, he was successively a soldier, secret agent, Jacobite, speculator, alchemist, cabbalist, Rosicrucian, astrologer, fraudster, and spy. He had changed his name several times, abducted a nun and had seen the inside of several prisons before turning his hand to revolution.”

To get more like this, sign up for my newsletter. Every month (or so) I’ll send you the latest posts from the site, and some of the most popular bits of the archive.

One thought on “The King of Corsica”

Discover the stories of Bletchley Park and the cod

On 2 August I’m doing a virtual tour “Most sec

The raggy plane tree on Clapham Common through the

The Hinton St Mary mosaic, from the #britishmuseum