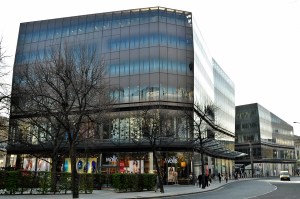 The architect of One New Change, Jean Nouvel, described his building as a ‘stealth bomber’; it’s something very big – well over half a million square feet of shops, restaurants and offices spread over eight floors – designed to almost be unnoticed.

The main reason for this of course is its proximity to St Paul’s. Certain views of the cathedral are legally protected. These are generally the views from some major London parks – Richmond, Greenwich, Alexandra Palace, Hampstead Heath and Primrose Hill – which aren’t allowed to be blocked by tall buildings. That’s why the really big skyscrapers in the City tend to cluster in the East and why there aren’t any in the area around the cathedral.

So One New Change hasn’t been allowed to impose on St Paul’s, but what it has done is to give us some great new views. Coming up the escalator with the dome appearing in front of you is a wonderful experience, as is riding in the glass lift; the panels in the central atrium reflect views of the Cathedral so that you’re aware of its presence whichever way you look; and on the sixth floor is a terrace that puts you on a level with the roof of St Paul’s – you feel like you can almost reach out and touch it. END_OF_DOCUMENT_TOKEN_TO_BE_REPLACED