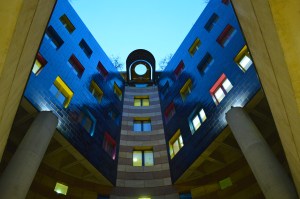 If you want to build anything in the City of London there are three hurdles to be overcome – first you have to be allowed to knock down what’s already there, then you have to planning permission for your new building, and third, you have to let the archaeologists in to dig up what’s been there before.

The classic example of this is the process for the development of Number One Poultry, the site opposite Bank junction and the Mansion House where Sir James Stirling’s post-modern construction now stands.

The story starts back in the 1950s when a developer called Rudolph Palumbo started buying the buildings on the site. He wanted to demolish the Victorian Gothic buildings that stood there, including the home of the jewellers Mappin & Webb. This project was picked up by his son Peter (now Lord) Palumbo who was given conditional planning consent to build a Mies van der Rohe-designed 18-storey bronze and glass tower on the site. (Many may not like Stirling’s design – Time Out readers voted it one of the five worst London buildings – but the block would have utterly changed the complexion not only of the junction, but of the entire City). END_OF_DOCUMENT_TOKEN_TO_BE_REPLACED