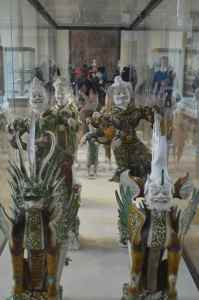 The Tang dynasty – 618AD to 907AD –  was one of the golden ages of China. We’re often a bit unspecific about the dates of exhibits in the museum – placing things in a century or even a millennium, but we know that these figures date to 728AD.

They are tomb figures for a general called Liu Tingxan whose funeral was in that year. This type of tomb figure was widely used among high-status individuals from about 700AD. They’re glazed earthenware in a style known as ‘sancai’, which means three colours: white, green and amber/red (they also did blue and black, but let’s not disappear down that rabbit hole).