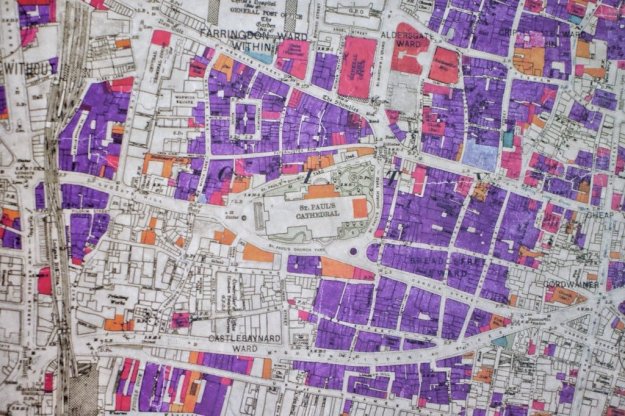 During the war the London County Council surveyors chronicled the devastation caused by enemy bombing on the capital. Hand colouring street level OS maps, they plotted the buildings damaged; generally speaking, the darker the colour, the more the devastation – black was “total destruction”, purple “damaged beyond repair”, right through to yellow “blast damage: minor in nature”.

Take a look at the example above, the area around St Paul’s cathedral showing the destruction caused by ‘the second great fire of London’ on the night of 29/30 December 1940, when huge swathes of the City burned and the firefighters struggled to contain the conflagration.

Generally speaking, the further east one goes the more the damage, the docks being a strategic target for the Luftwaffe, but there is hardly a district that didn’t have some bombs falling, regardless of whether they were close to ‘legitimate targets’ or simply the rows of residential terraces. (The ‘Bomb Sight’ project maps these.) As well as the damage caused by the main Blitz of 1940/41, the LCC also recorded the impacts of the V1s and V2s in 1944 and 1945, these terror weapons falling genuinely randomly across the capital.

The maps have been available in book form for some time, and each visit I make to the Cabinet War Rooms I leaf through a copy and wonder how to justify the thick end of fifty quid. However, today those lovely people at Layers of London made the map available online, but it’s even better than that.

Because the whole concept of Layers of London is that one can superimpose historic maps on those of the present, or merge two multiple old maps together, making the historic relatable to the present or to another period. So one can look at the bomb damage on a modern map, the maps of the 1960s, or even (should you wish to try it – and I have) in relation to 18thC maps of the city. Below is a screen grab of my street, with the bomb damage superimposed on the modern map (there is infill housing in both places). 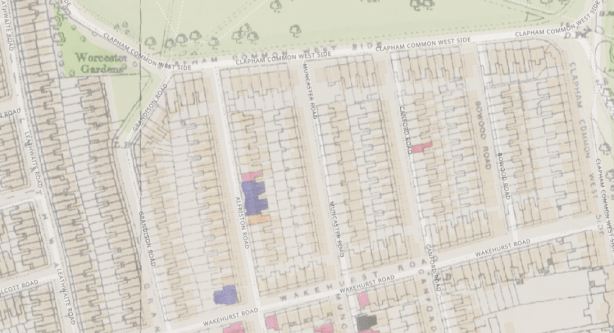 This is a stupendous and wonderfully generous piece of work, and I for one will be wasting several hours on the map over the next few days.

You can find Layers of London here.