This review dates from October 2016. The production was seen at the Richmond Theatre. 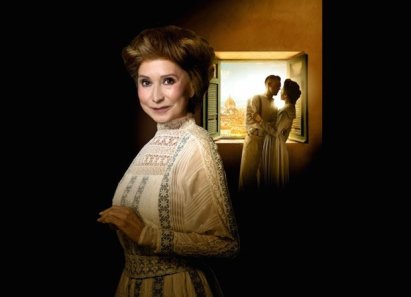 A Room With a View is a visually interesting, but wordy and emotionally unengaging adaptation of the E M Forster novel.

Lucy Honeychurch – a young middle-class Edwardian woman – is visiting Florence with her older, spinster cousin Charlotte Bartlett as chaperone. There are suffragettes on the streets of London, but ‘ladies’ are still expected to follow the Victorian rules surrounding ‘class’, social status and polite behaviour.

In their pensione Lucy and Charlotte meet George Emerson and his father – socialists and humanists, with radical ideas about religion, sexual equality and life. The snobbish Charlotte rebuffs the approaches of the lower middle class Emersons, but Lucy falls for George and, on a day trip to the Tuscan countryside, kisses him. Charlotte is mortified and whisks Lucy away from Florence.

Back in Surrey, Lucy goes back into the life expected of her and gets engaged to the foppish and socially superior Cecil. The arrival in the village of George and his father sets off another chain of events which leads to Lucy discovering her true feelings, and freeing herself from the social conventions imposed upon her.

The production, directed by Adrian Noble and designed by Paul Wills, looks lovely. There are huge wooden shutters doubling as both scenery and scene breaks, and painted backdrops capturing views of Florence, the city streets and the Italian and English countryside, and the cast wear immaculate Edwardian clothing, but the play fails to gel dramatically.

Felicity Kendal – the star name on the programme – plays Charlotte Bartlett, who has the conventional Victorian worldview against which Lucy ultimately rebels. In the novel and the film of the book, this is a relatively minor character, but given Kendal’s box office draw, the significance of the role has been expanded, including a dramatic twist that doesn’t really work. The two lovers – Lauren Coe and Tom Morley – aren’t strong enough to counterbalance this, and moments that should carry dramatic weight – Lucy’s awakening to her love for George, Cecil’s realisation of his failings – lack any emotional impact. We don’t feel Lucy’s internal conflict, nor, really, do we understand why she thought she loved Cecil and why she does love George.

There are some nice moments of comedy – the bathing party where Lucy and her mother are confronted by several naked men being the scene that drew applause from the audience – and Simon Jones as the vicar, Jeff Rawle as Mr Emerson and Jack Loxton as Lucy’s brother Freddy are all good, but many of the other players struggle with the sheer volume of words that they have to deal with and we don’t engage with their characters at all.

As an audience we’re like the English tourists criticised by Miss Lavish, the female novelist whom Charlotte befriends in Florence; we admire the view, but don’t experience any of the reality.