This review dates from November 2016 and refers to the Glyndebourne Company’s production at the New Victoria Theatre, Woking. It first appeared on the Essential Surrey website. 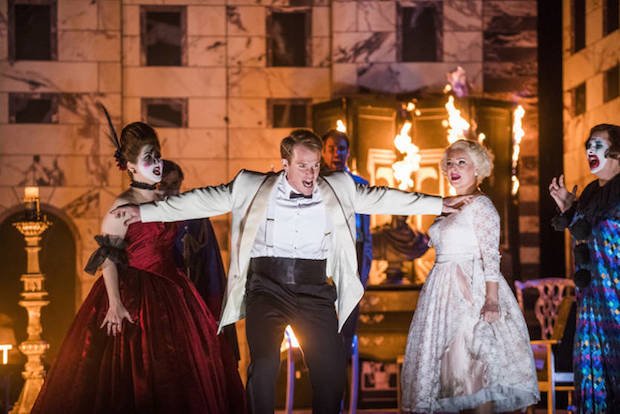 Tickets for the summer season at Glyndebourne sell out remarkably swiftly, so the opportunity to see the Glyndebourne company on tour is not one to be missed. Last night’s performance of Don Giovanni at Woking’s New Victoria theatre did not disappoint, with a strong orchestra conducted by Pablo Gonzalez, wonderful singing – particularly in the ensemble pieces – and a striking and ingenious staging.

Mozart’s anti-hero is a man with no moral scruple, his catalogue of sexual conquests numbering thousands, and the women he can’t seduce he takes by force. The opera opens with his attempted rape of the noblewoman Donna Anna, whose screams alert her father the Commendatore, whom Giovanni murders – in this production most brutally, battering him to death.

Giovanni and his servant Leporello (a fine performance from Brandon Cedel) flee into the night, leaving Anna (sublimely sung by Ana Maria Labin) and her fiancé Ottavio swearing vengeance on the murderer. The Commendatore will be Giovanni’s nemesis.

In last night’s performance Norman Patzke stood in as Don Giovanni for the ill Duncan Rock, and was exemplary, holding the audience’s attention throughout with his rich baritone.

Also on the Don’s heels is Donna Elvira (Magdalena Molendowska), one of his former lovers. She is torn between her contempt and her continuing love for him (as movingly sung in the Act II aria “Mi trade quell’alma ingrata”).

Ignoring these distractions, Giovanni gatecrashes a peasant wedding, inviting the wedding party to his palazzo, his intention being to seduce the young bride Zerlina, as Leporello distracts her new husband Masetto.

As with Don Giovanni, the advertised Zerlina was ill and the role sung by the understudy, Charlotte Beament. At her first appearance her voice sounded a little thin, but she grew in stature throughout the evening and her duets with Leporello and Giovanni were beautiful.

Zerlina screams as the Don attacks her, and Masetto, aided by Ottavio and Donnas Anna and Elvira burn the palazzo and pursue Don Giovanni into the night.

Even when hunted and under the threat of death, Giovanni tries to add more conquests to his list and, changing clothes with Leporello he attempts to charm Donna Elvira’s maid. Leporello meanwhile is captured by Masetto and Zerlina who, thinking him to be his boss, threaten to kill him.

Leporello escapes and is reunited with the Don and tries to persuade him to give up his life of wickedness. Giovanni laughs this off and, to show his contempt for ordinary morals, goes to the graveyard to invite the corpse of the Commendatore to dinner.

In the final scenes the body of the Commendatore does indeed take up the invitation. He calls on Don Giovanni to repent, but he refuses and is dragged down to hell.

This is an enjoyable and powerful production, whose 3+ hours speed by. All the central characters are well sung, and the chorus and orchestra were note perfect throughout. It is well worth trying to get tickets for the remainder of this year’s tour.