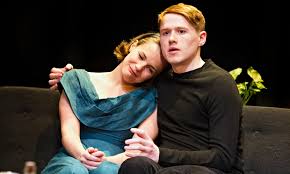 Myra Bolton leads a hugely complicated life. Her house is littered with books, pamphlets and newspapers, as well as friends, lovers, ex-lovers, would-be lovers, and the lovers of ex-lovers. They all discuss politics “with the passionate intensity others reserve for sex”. She moves from protest march to committee meeting to yet another campaign.

Back into this chaos comes her 22 year old son Tony, returning from two years of National Service. The army gave him the order and stability his life had never had and now all he wants is to be back in his old room in the house that was the only constant part of his childhood.

But Myra has forgotten he is coming home and his room is occupied by her current lover, the 22 year old son of her best friend. Tony has to sleep on a couch in the hall, in the middle of the chaos, as people come and go. And unknown to him, Myra has sold the house so that Tony can be ‘free’ to restart his studies to be an architect.

Tony has other ideas. He trained as an electrician in the army and doesn’t want to build new things, he’s happy with trying to make connections work.

Lessing’s play is about how the different generations fail to connect. Although written in 1958, some of the inter-generational conflicts seem appropriate today, with a politically engaged older generation despairing at the apparent conformity of the young. The younger generation are cynical – the petitions and the marches don’t ever change anything, so why bother? Myra’s generation think they care because they campaign for so many things, but it’s only Rosemary, the 20 year old fiancée of Philip, one of Myra’s ex-lovers, who is moved to tears about the suffering of actual individuals. 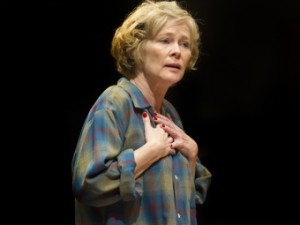 Lots of themes are raised – gender politics and the role of women, political compromises, the use or otherwise of protest, how our children create their own lives – and that may be its problem; there is just too much being discussed, too many things being brought up but not resolved.

Ultimately Myra refuses to compromise either her politics or her personal life, casting off her lover and the men who want to marry her, leaving Tony and his ‘petit bourgeois’ considerations behind, to join another protest, a boat sailing into the area where a nuclear test is to take place. A triumph of principle, or simply the egotism that she accuses her son of having?

The production zips along, carrying its two hour 15 minute running time very lightly, and there is a great deal of wit and humour in the dialogue. The intimate space at the Orange Tree works well for the production, reinforcing the claustrophobic nature of these people’s lives and relationships. The cast are good, with Clare Holman as Myra and Joel MacCormack as Tony bringing a lively dynamic to the mother/son relationship.

But it’s very static, not only in the fact that it takes place in one room, but also dramatically; we don’t engage with these people much and come away with a feeling that nothing much has been or will be resolved. Perhaps that’s what Lessing intended by the title of the play – each character will carry on in their own wilderness, failing to listen, failing to connect, and failing to change.