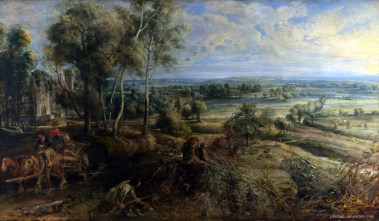 An Autumn Landscape with a view of Het Steen in the Morning:  Peter Paul Rubens: 1636

When we look at this picture we can tell it’s going to be a beautiful day. The sun is rising, it’s late summer/early autumn and the land is at its most productive. This is a view of the area around Malines, between Brussels and Antwerp in present day Belgium.

We can see a hunter and his dog at the front of the painting and the line of the hedge leads the eye to their quarry – a little flock of partridges. We’re then led over a little wooden bridge and a couple of dairymaids milking cows, and beyond that flat, green fields with the last of the early morning mist just hanging on.

Over to the left of the picture there’s a farmer and his wife taking their cart laden with produce off to market – there’s a calf and a barrel of something that we can see. Back towards the house a man is leaning over a stone bridge with a fishing rod in his hand. Although this is a working landscape, we get a wonderful sense of tranquillity and peace, and of a bountiful land. Rubens has created a sense of space and distance – the detail of the foreground which the sun hasn’t quite hit, the greens of the land stretching away, and the blue and white of the sky; the eye being drawn to the sun as it is when we look at an actual sunrise.

There is another little group of figures over on the left – a man and woman, and a nurse with a baby – taking in the view. That’s Rubens and his wife and one of their young child, because Het Steen – the stone house – was owned by Rubens and this painting is him celebrating how content he was with his life. The picture is painted on wooden panels and it seems that Rubens started with just three panels, focusing on the house, but by the time he’d finished it had grown to 19 and this huge landscape that we can see. I think that’s an indication of his love for his home, the landscape and of how his life was working out.

He’d bought Het Steen the previous year, in 1635, to retire to. He was hugely regarded as a painter in his lifetime, but he was also a diplomat, shuttling between the courts of Europe – Spain, France, England, the Netherlands – on behalf of Isabella, the ruler of the Spanish Netherlands. A portrait painter gets access to all sorts of people that other diplomats might not.

Rubens’s first wife had died in 1625 and in 1630 he’d married again. He was 53, his wife was 16. They had five children. Het Steen was for him the place to bring up his family, it was a symbol of his success, and it was where he could indulge his love of painting landscapes – not necessarily to sell, but for the enjoyment he got from doing them.

Rubens only had five years at Het Steen, because he died in 1640. Which also adds poignancy to the whole scene – Rubens had got everything he wanted, but had a relatively short time to enjoy it.