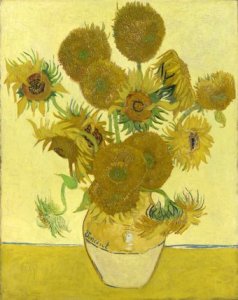 This painting is probably very familiar to you, because it’s one of the most famous in the world. The postcard of this is the best-selling card in the National Gallery shop, and the floor here is the most scuffed in the gallery. Everyone wants to look at it.

A simple description might just be that it is a painting of 15 yellow flowers, in a yellow vase, against a yellow background, signed ‘Vincent’. So what gives the picture its power? Why is it so popular?

Firstly, it is that boldness in using yellows, golds and browns, with just a thin blue line across the centre for contrast. It’s almost as if the picture is generating its own sunshine and filling the room with yellow light.

But as well as this brightness there is something more profound. Note how the flowers are in different stages, from freshly-cut blooms to withered heads, representing the cycle of life and death.

And when we look at this picture it connects us to Van Gogh in a way that the reproductions never can, because we can actually see what he’s done to make it so striking. Look at the thickness of paint, especially on some of the seed heads. This is a technique called ‘impasto’ and Van Gogh put the paint onto the canvas directly from the paint tubes.

That’s another reason why we relate to the picture, because if ever an artist lived up to the term ‘tortured genius’ it was Van Gogh. He committed suicide when he was just 37 and painted for less than ten years, but in that time he completed nearly 900 paintings as well as hundreds of drawing and sketches. He was hugely troubled by mental illness throughout much of his life.

The ‘sunflowers’ dates from 1888 when Van Gogh had moved to Arles in the South of France. He invited the painter Paul Gaugin to stay with him and as a welcome gift planned to decorate his room with a dozen sunflower pictures. In fact he did four within just a week in August 1888 – and astonishing rate of work.

Gaugin arrived in Arles in October and the two of them painted together for a while, but the relationship seems to be a troubled one with frequent arguments. When Gaugin announced at Christmas that he was leaving it triggered some sort of psychotic episode in Van Gogh. This was when he cut off part of his ear, almost bleeding to death as a result, and he was committed to a sanatorium. Over the next couple of years he had periods of lucidity as well as periods of illness, until in 1890 he shot himself in the chest and died a couple of days later when the wound became infected.

Famously he sold only one painting in his life, but whenever his pictures have come up for auction in recent years they have topped $100 million dollars.