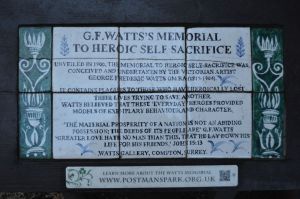 A small bit of green space on the site of the churchyard and burial ground of St Botolph’s, Aldersgate, which opened in 1880. Over the next 20 years it also incorporated the burial grounds of Christchurch, Greyfriars and St Leonard’s, Foster Lane. Because it is an old burial field, the ground level is considerably higher than the area around it.

It’s called Postman’s Park because over the road is the old headquarters of the GPO, and the park was very popular with the workers there.

But that’s not why it is famous.

The park is home to the wonderfully named “George Frederic Watts Memorial to Heroic Self Sacrifice“, a wooden pavilion (or loggia) on which are 54 ceramic tablets commemorating ordinary people who died while trying to save the lives of others.

– Although he is less well known now, Watts was a famous artist of the Victorian era, a painter of portraits and ‘symbolist’ pieces, and a sculptor (his “Physical Energy” can be seen in Kensington Gardens) and he conceived the idea of a memorial to everyday heroes who would otherwise be forgotten. He’d collected hundreds of newspaper clippings of heroic acts and felt that these people were deserving of recognition. He first proposed the idea in a letter to The Times in 1887 as a way of marking Queen Victoria’s Golden Jubilee.

(“The material prosperity of a nation is not an abiding possession; the deeds of its people are.” he wrote.)

But it was 1900 before anything happened when the first four tiles were unveiled. By then Watts was 83 and too ill to attend the event. Only nine more titles were added before his death in 1904, with a further eleven – finishing off one row in the memorial – put in place in 1905.

The project was taken over by Watts’s widow Mary, who commissioned a further 24 tiles (another full row). The original tiles had been done by the firm of de Morgan, but they went out of business in 1907 so Mary Watts approached the Royal Doulton factory to get the next ones made. And she didn’t like them – you can see the difference in the colour and design between the originals in the third row and the Doulton ones in the row beneath –  so there was no ceremony when they were installed.

After that, the money ran out (the tiles cost several hundred pounds each in today’s money) and Mary lost interest. A handful more were added in the 1930s, then nothing until 2009 when the 54th was put up. The organisations responsible for the Memorial say that this will be the last; there is space for 120 tablets, but it will never be finished.

You should go and read the memorials for yourself (or download the app or the buy the book), but my particular favourites include:

And perhaps the most famous, Alice Ayres, who saved the life of three children in a fire in Union Street in Borough in 1885. She became very famous immediately after her death – there’s a memorial to her in Isleworth cemetery and a street in Borough was named after her in 1936 – and became ‘famous again’ following Patrick Marber’s play (and the 2004) film ‘Closer’, in which one of the central characters adopts the name.