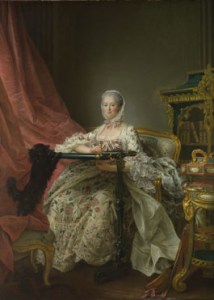 This representation of domesticity was a definite decision on her part, as she was probably the most powerful woman in France at this time. As well as being the King’s mistress she exercised a great deal of influence, with a big say in Royal patronage as well as in domestic and international policy.

Courtiers felt that she had too much power, and after the Seven Year’s War, which ended in a humiliating defeat for France, she became the focus of discontent within and outside the Court. This painting was part of her reinvention of herself as ‘simply’ the companion to the King, not a meddler in the affairs of state – even though she still continued to use her influence right up until her death. In earlier portraits she appeared as a flirtatious beauty, but here she shows herself as middle-aged with a double chin, but still with a captivating expression, her face surrounded in a sort of halo.

She’d been born plain Jeanne Poisson – Jane Fish – in 1721 and was married at 19 to the nephew of her mother’s lover. She became famous for her Paris salon where artists and writers would meet. In 1745 she became the King’s mistress, was moved into apartments in Versailles and left her husband (and her young daughter). Louis gave her the title of Marquise de Pompadour and, although they stopped being lovers in the early 1750s, they remained close – the little dog standing up on the chair in the picture represents her fidelity to the King.

Artistically this painting heralds a move from the Rococo – or ‘late Baroque’ as it’s sometimes called – which we can see in the scrolling detail on the lace hem of her dress. This was a style particularly associated with Madame Pompadour, especially her interest in Sevres porcelain. The new style of ‘neo-classicism’ is shown in the elaborate work table in the right foreground.

On one of the porcelain plaques in this work table is Drouais’ signature and the information that he painted Pompadour’s face in 1763 on a separate piece of canvas which was then joined to the rest of the picture in May 1764. That was the month after Madame de Pompadour died – she was just 43 years old.

NEXT: TURNER – THE FIGHTING TEMERAIRE