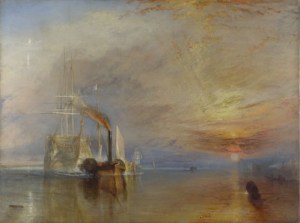 J M W Turner: The Fighting Temeraire tugged to her last Berth to be broken up: 1838

We see a magnificent sailing ship – brilliant white and gold, almost like a ghost ship – being towed by a small steam tugboat with smoke and flame pouring from its funnel. It’s sunset, with a fiery red sky reflected in the water, and a pale new moon rising in the top left hand corner.

This is the Temeraire, a ship that had fought as part of Nelson’s fleet at Trafalgar, being towed to the docks at Rotherhithe on the Thames to be broken up.

Turner had witnessed this event one day when he was out on an excursion on the river, but his representation of it here has a great deal of artistic licence.

First, the Temeraire was by then just a hulk, stripped of her mast and everything of value. Turner has painted it as if it had just left Trafalgar, with the detail so fine you can make out individual windows and the ropes of the rigging. Second, the ship was being towed upriver, from east to west, so the sunset would not have been behind her..

So Turner is telling a story with what he has painted. The first point is his contrast between the magnificence of the old sailing ship and the prosaic grubbiness of the steam tug – the beautiful and the mundane.

The second element is that sunset. If you look at the reds and oranges on the sky and the water you notice the depth of the paint – a technique called impasto – where Turner has applied it so thickly it stands right out of the canvas.

So it’s a metaphorical sunset; the closing of one era – the age of sail – with the new moon showing the birth of the next – the age of steam.

And look more closely halfway between the tug and the sun and you can see an identical tug in the background, and behind that a whole forest of ships’ masts trailing off into the distance. They are the past, and the dirty little steamers are the future. It’s the ambiguity of the Industrial Revolution captured in one picture.

Turner never sold this painting. He considered it one of his most important pieces and it stayed in his studio until he died in 1851. He left it and many other works to the nation. They became part of the National Gallery collection, most of them being transferred to what became the Tate Gallery along the river at Millbank in the 1890s.

Just one more thing, the OED says that Turner’s title for this painting is the first use of the word ‘tugged’ to talk about one vessel pulling another – so we can thank Turner for the word “tugboat”.