[Update: the good news, if you read the comments below, is that Bradley’s is safe until at least 2018. So even I might get around to visiting it again.]

[update 2: the not good news. the lockdown threatens the survival of the Bar. Jan de Vries has a fundraiser here to try and keep it going] 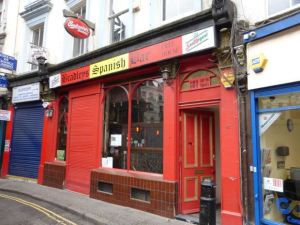 Hanway Street, a narrow little cut-through (that hardly anyone actually uses to cut through) between Oxford Street and Tottenham Court Road, has just been bought by developers, and that means another of London’s institutions will be swept away.

That is Bradley’s Spanish Bar, a place that I haven’t been in for nearly 20 years, but which has huge, fond memories of when I worked in Covent Garden and Soho in the late ’80s and early ’90s.

Bradley’s was one of those places where you met up with friends, because it was a memorable place; once you’d been you never forgot it.

It was run by a bald ex-wrestler who I always thought was Maltese, but who others have told me was actually Spanish (update: one of three Greek brothers), and there was an upstairs bar at street level (always crowded) and a downstairs bar that was less so.

That downstairs bar was pretty small, not much bigger than someone’s front room, with plush banquettes along the walls, little round wooden tables and those tiny padded pub stools that you don’t see any more. It had a small wooden bar where you ordered what – for then – exotically named lagers and curious tapas, and was thick with cigarette smoke.

It felt like a bit of a dive – the sort of place your mother had in mind when she warned you about ‘London’ – and it made drinking seem slightly seedy and disreputable – which is how it should be. (The front bar at the Hole in the Wall used have the same effect.)

London is changing rapidly and has always changed rapidly, and preserving anything just for the sake of it turns a city into a lifeless museum, but that doesn’t mean one can’t regret the loss of those places that brought character to an area or defined one’s early adult life.  But do we mourn the actual place or the person we once were?

Anyway, farewell Bradley’s, another bit of Soho lost (yes, I know it’s north of Oxford Street, but spiritually it’s in Soho). We can file it away with other lost ’80s institutions like Pollo’s, the Stockpot, Jimmy the Greek’s and the pre-refurbed Coach and Horses and French House.

Sometime before it closes I’ll head down for a plate of slightly acidic patatas bravas and a couple of exotic lagers and toast its demise and my 20s.