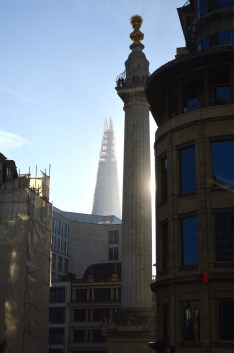 Climb the 311 stairs today to the top of the Monument and the view lays out the 21st century City. To the north the Walkie Talkie seems close enough to touch, and behind that are the Cheesegrater, the Gherkin, Heron Tower and the other towers of skyscraper alley.

To the south the view is dominated by the Shard, but the Elephant and Castle developments are now starting to block that horizon; the east has the packed legoland towers of Canary Wharf.

The west gives some relief with a great view of St Paul’s and down the river to Westminster, but look down into the City and one can see the current building boom with cranes and construction sites all around. 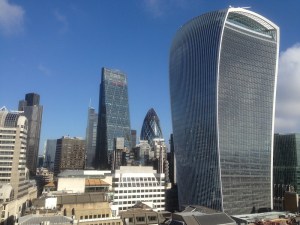 It’s a very different view to just 20 years ago, but try to imagine the immensity of the change since the column was erected in 1677. In fact, though, the amount of work we see today is a fraction of what we would have witnessed in the late 1600s as the City attempted to rebuild after the Great Fire of 1666.

That, after all, was the reason the Monument was built in the first place, to commemorate the Fire and as a symbol that London would rise again – bigger, stronger, better and richer. On the west side of the base is a relief by Caius Cibber of Charles II directing the restoration of the City as Europe looks on enviously.

Designed by Sir Christopher Wren in association with his friend Robert Hooke, the Monument is a single doric column with a glided flaming urn on the top. (Earlier ideas included a statue of a phoenix rising from the flames – such as on the southern pediment of St Paul’s -, Charles II looking out over the city, or a representation of London triumphant.)

As well as celebrating the rebirth of London, the Monument was also designed to enable gravity and pendulum experiments, and a hinged lid in the urn allows the whole column to be used to observe the stars. 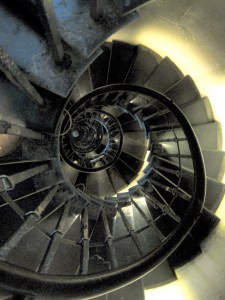 The public viewing deck is 160 feet up, with the very top of the structure being 202 feet – the exact distance from the base of the Monument to the baker’s shop in Pudding Lane where the fire started. (Interestingly, of the six suicides from the column, three have been of bakers.)

Today the Monument seems oddly disconnected from the bustle of the City, but until 1837 (when a replacement bridge was built a little to the west of Old London Bridge) the main road across the river ran past the base. Any traveller entering or leaving the City via the bridge would have been aware of the structure and its symbolism would have been obvious.

It costs £4.50 to climb the stairs, and the Monument is open from 9:30 each morning. Details here.