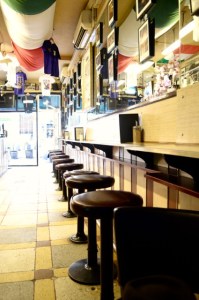 I’m having a coffee in the last of the Soho coffee bars.

An absurd statement on the face of it; there are probably more places to get a coffee in Soho now than at any time in the past.

But I’m talking about the Bar Italia, a place that justifies the label ‘Soho Institution’ and a world away from your chai lattes and skinny decaffs.

Here you’ll still find the waistcoated waiters (all Italian), a gleaming Gaggia machine and polished brass till. The picture of Rocky Marciano is still behind the bar, the Italian flags, football trophies and the last of the Christmas pannetone hang from the ceiling. It’s the closest you’ll get to a true Italian bar this side of Palermo.

I’ve been coming here for nearly 30 years, but the business has been going strong since 1949 when Luigi and Caterina Polledri opened the doors. Their grandchildren are still in charge.

Like much of Soho, Frith Street, where you’ll find Bar Italia, has layers of history. Mozart lodged in number 20 when the child prodigy was brought to England by his father, and upstairs in number 22, above what’s now the bar, John Logie Baird demonstrated his television system in January 1926.

An homage to Baird was paid by Sky in 1988, when their first digital satellite broadcast was shown on a TV in the bar. This morning the big screen is tuned to what seems to be an Italian version of Ready Steady Cook, but you should try and get through the doors when Italy have a football match. In 2006 when the Azzurri won the World Cup, it’s estimated 8,000 people were in the street outside. 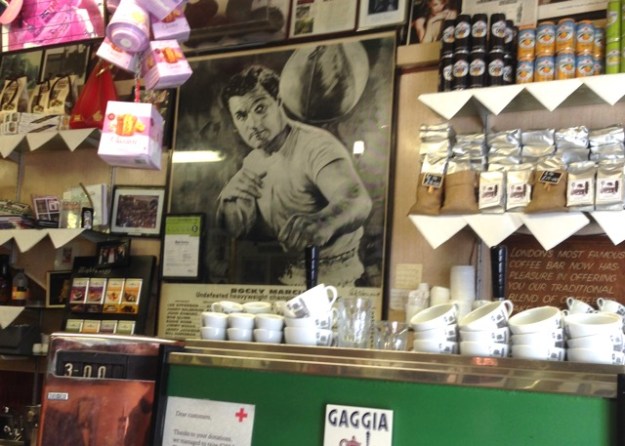 Bar Italia is open until 5am, then reopens at 7am – a fact that makes it the haunt of clubbers, night workers and insomniacs. When St Martin’s College was just around the corner in Charing Cross Road, it was also the hangout of the art school crowd, including St Martin’s alumni such as Sade, Neneh Cherry and Jarvis Cocker, who celebrated early morning espressos after a night out in the Pulp song ‘Bar Italia‘:- “now it’s morning there’s only one place we can go. It’s around the corner in Soho where other broken people go.”

When I worked round the corner in Soho Square in the late ’80s, this was the place to sneak off to when the office got too dull. In the days before mobile phones you could smoke your cigarette and drink your coffee in peace, and hope you looked like one of the cool kids rather than the mad old eccentrics. (And both groups are still there.)

This is a living London icon which you should experience while you can, because although Bar Italia is full, popular and profitable, Soho, like much of the rest of London, is changing, becoming more homogenised, less individual. 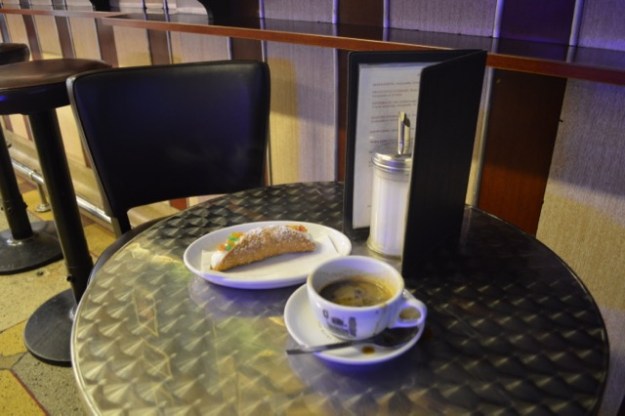 So stroll across the 70 year old Italian terrazzo floor, grab an espresso and a cannolo, pull up a stool on the formica counter by the wall, catch a bit of Italian TV and be one of the cool kids for half an hour.

We visit Bar Italia on my Rock and Roll Soho walks, and find out about the coffee bar culture of the 1950s and 60s (and get ourselves recaffeinated).