This review dates from April 2017 and is the Clapham Omnibus production. It first appeared on the Essential Surrey website. 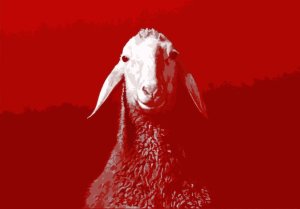 April runs a guesthouse on the site of an old WW1 field hospital, catering to the ‘war tourists’ visiting the battlefields and graveyards of the western Front.

Despite it being the start of the season, she has only two guests – Pam, who has spent all her adult life living with and caring for her mother, and Tom, a former military man who runs battlefield tours and sells souvenir tat (“we went to Ypres and all I got was this lousy mug”). In this new play by Victoria Willing, we watch the three bicker and quarrel as they await the arrival of other guests and the return of April’s son. As the evening progresses, the atmosphere turns poisonous and we learn more about the motivations, the secrets and the histories of the protagonists.

‘Spring Offensive’ is strongest when dealing with these characters; the controlling, penny-pinching April (played by Willing herself) who thinks of herself as “rock n roll” and “laissez faire”, but is domineering, snide and has a need for attention; the emotionally barren Colonel Parker (Tony Turner), jealous of the success of others and hiding numerous personal secrets; and the poetical Pam (Maggie Daniels) free at last of her overbearing mother and wanting to experience the life that was denied her, but still with a desperate need to be needed. It is a strong cast, with Daniels in particular very good as the unworldly and eager to please Pam, and well directed by Omnibus’s Artistic Director Marie McCarthy.

The personal lives of each of the three are gradually revealed over the course of their evening, their dependence on each other, their lives’ failures and thwarted dreams, and their fears of the future and of being alone. The play is on less sure ground when trying to make broader points about the futility of war – the metaphor of sheep and ‘lambs to the slaughter’ is a wee bit overdone – but that is a minor quibble in an interesting, engrossing and at times funny play.

The staging, which takes place in the round, with the audience sitting on a variety of comfy chairs as if they were in April’s living room, works well. ‘Spring Offensive’ is the latest production from the creative team at Omnibus, the relatively new performance and artistic space in Clapham. Opened three years ago in the former Clapham Library, Omnibus (www.omnibus-clapham.org) runs a comprehensive programme of theatre, music, exhibitions and performance, holds writers’ workshops and theatre classes, and all without any public funding.