With the current building works going on around it, the approach to St James’s is now down Garlick Hill, an indication – along with the church’s suffix – of what the area was known for in medieval times. A ‘hythe’ is an old English word for a jetty or landing, so this is the place where garlic was unloaded and brought into the City. It was also where wine was landed, as the church is in the ward of Vintry – home to wine merchants. More on this shortly.

There has been a church on this site since at least the 1100s and the scallop shell motif seen above the door indicates that this was a pilgrim church – it was a stop on the route to the cathedral at Santiago de Compostella which was reputed to hold the body of St James the Apostle. It was rebuilt in the 1320s with money from Richard de Rothing, a member of the Vintners’ guild and, although St James’s is the Guild Church for ten Livery Companies, it is with the Vintners that it is most closely associated.

As with so much of the City the church was razed in the Great Fire of 1666 and rebuilt by Wren. It has the highest ceiling of any Wren church and the amount of glass used earned it the nickname ‘Wren’s Lantern’. There’s some discussion over who designed the spire: Pevsner says Wren, Wikipedia says that it was his pupil Hawksmoor.

It survived intact through both World Wars, although a Zeppelin raid in 1915 came close and in 1941 a bomb came through the roof but didn’t explode. The surrounding area suffered heavy damage from incendiaries, but the church came through relatively unscathed – although the magnificent clock at the front of the church was destroyed. What we see today is a 1988 replica of the 1682 original.

Given the Vintners’ close association with St James’s it’s ironic that the church suffered major damage in 1991 as a result of the construction of Vintners Hall just over the road when a crane collapsed and the jib came through the wall of the south transept, destroying the rose window and causing considerable internal damage.

An embalmed body used to be on display in a glass case in the vestry. This was the corpse of a man found in the vaults in the 1850s and was nicknamed “Jimmy Garlick”. He is believed to have died in the late 17th or 18th century and – of course – stories abound of him haunting the church. His body is now in the tower of St James’s, away from public view. 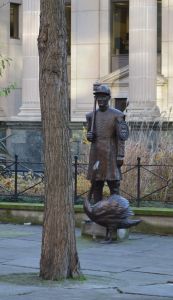 A further association with the Vintners’ is the statue just in front of the church.

This is a bronze of Martin Spencer, then the Bargemaster of the Vintners’ Company and he’s accompanied by a swan to commemorate Swan Upping – the annual tagging of swans on the River Thames that has been going on for at least 500 years.

All swans on the Thames are owned either by the monarch, or by the Vintners’ and Dyers’ Companies. In past times these three institutions were the only ones allowed to take swans from the river and ascribe ownership the birds were marked – one nick on the beak meant it was owned by the Dyers, two nicks for the Vintners (one on each side of the beak) and birds with no marks were owned by the Crown. (There was an inn called ‘The Swan with Two Necks‘ just off Cheapside – ‘necks’ is a corruption of ‘nicks’, so this referred to a Vintners’ swan.)

These days the swans are ringed rather than cut, and the practice is as much to do with taking a census of swans and assessing the health of the birds as it is with ownership. The rituals persist however, with the swan uppers taking to the river in Victorian rowing skiffs and, as they pass Windsor Castle, standing in the boats with oars raised and saluting “Her Majesty the Queen, seigneur of the swans”.