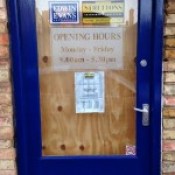 The closing of a small estate agent’s office in South West London is hardly big news (some might even raise a cheer), but the closure of the Edwin Evans office on Lavender Hill marks a break with a significant piece of Battersea history.
Because it was the original (Sir) Edwin Evans who bought, demolished and developed Battersea Rise House and its 22 acres of land on the north west corner of Clapham Common. His consortium paid £51,000 for the whole plot and parcelled off lots for development, with 475 houses being built on the land between 1908 and 1915.

Battersea Rise House dated from the early 18th century, but it came to prominence from 1792 when Henry Thornton, a wealthy banker, bought it and moved in with his cousin William Wilberforce.

Two of Thornton’s brothers owned villas on Clapham Common Southside and Thornton’s aim in buying Battersea Rise House and the land surrounding it was to create a community of like-minded (and high-minded) friends. Two substantial houses, Glenelg and Broomfield were built in the grounds, with Wilberforce moving into Broomfield House when he married in 1797.

Battersea Rise House became the centre of and meeting place for the Clapham Sect, that great Anglican evangelical movement dedicated to, in Wilberforce’s words “the suppression of the slave trade and the reformation of manners”. Thornton was the prime organiser and financier of the campaign and Wilberforce provided its heart and charismatic leadership.
Wilberforce moved from Broomfield in 1808 (the year after the passing of the Slave Trade Act, the first of the two Acts that brought about the end of slavery in the British Empire) and Thornton died in 1815 and Battersea Rise passed to his eldest son, Henry Sykes Thornton. He died in 1881, and his will allowed for his widow to retain a life-interest in the House, which was to be sold after her death, which happened in 1907.
Twenty-two acres in all were auctioned and bought by a consortium headed by Edwin Evans and plans were approved for the building of houses, a church and a school. It seems that it was only at this point that it was realised the importance of Battersea Rise House as the locus of the anti-slavery movement and a campaign was got up to save the house as a memorial.
Evans offered to sell at ‘cost price’ the house and two acres of land to Battersea Council, but because he was a prominent Conservative and the Council was in ‘Progressive’ hands, the offer was rejected and the demolition went ahead.

On the space where Battersea Rise and its grounds and adjacent properties stood are now Alfriston, Muncaster, Canford and Bowood Roads; if you wanted to buy all of the houses built on this land you’d now have to fork out north of £500 million – an illustration of what 100 years of property price inflation can achieve.