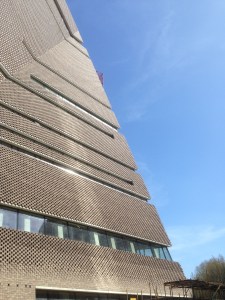 Step out of the back door of the Blue Fin Building (as I did this morning) and rising up in front of you is the new extension to Tate Modern – 167,699 bricks’ worth (according to their website).

It’s by the firm of Herzog & de Meuron (who did the work transforming Giles Gilbert Scott’s original Bankside Power Station into the Tate Modern back in 2000) and “will present a striking combination of raw industrial spaces and refined 21st century architecture”.

Striking it certainly is, its angular form contrasting starkly with the clean lines of the power station. Its ten storeys tall, and built on the old oil storage tanks (Bankside was oil-fired, unlike Scott’s coal-fired Battersea power station, also currently being transformed). The Tate say that the new development will increase display space by 60%.

I’ve an ambivalent attitude to much contemporary art, finding it engaging on an intellectual rather than an emotional level, and although I love the Turbine Hall space at Tate Modern it’s not a gallery that I find myself drawn to. Let’s see what goes into the new extension when it opens on 17 June.